Plants As A Metaphor For Change 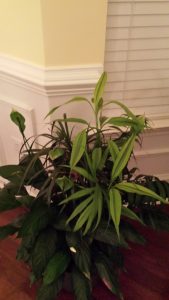 David Bowie wrote a song about it. Barnes and Noble has numerous books about it. And, Netflix has at least 30 movies that promise you will do it after watching them.  What is the subject that a musician, a book seller, and a streaming service all have in common? Change.  I’ve heard it said it takes 21 days to change a habit – maybe, maybe not. Change, in and of itself, is reality and there are many ways to cope with change.

How do we see change in our own lives?  Sometimes change can be so small that it feels as though nothing is happening. Think – losing weight or quitting smoking.  It can feel like you take five steps forward and 10 steps backward.  Other times, change can be brutal and fast. Think –  an unexpected death, illness or visitor from one’s past.  Perhaps one of these situations has resonated with you and has created change in your life. Many of us know how to measure change in life: pounds lost according to the scale, the number of smoke free days, how many days of exercise, etc. etc.

But what about the change that is happening around us all the time? How can we see it and how can we use it?  In January 2011, I started aggressive chemotherapy and was in denial of what the drugs would do to me.  I knew I’d lose my hair and although I read about all the other side effects, I thought, “nope, I’m in good shape, this is not going to happen to me.”  I was wrong.  About one month after starting treatment I received a nine-inch potted plant from a friend in Minnesota. He was in his 80s and taking care of his wife who had Parkinson’s disease.  The planter contained four different species of plants, and it was green and perfect for my small apartment.  I placed the plant on a table by the window and watered it every Sunday.  As I continued treatment, the plant thrived and eventually flowered.  I, on the other hand, was not thriving. Of course, all the hair fell out, then the neuropathy started, followed by ringing in the ears, loss of taste and extreme fatigue.

The plant became my metaphor for change.  The sicker I became, the more it thrived. I found it uplifting to see beauty in such a small container.  As years passed, I noticed the plant was struggling. I tried different locations in the apartment, more water, less water, more sun, less sun, yet nothing seemed to work.  It was still alive, but with little growth. It went a few years without even flowering.  Simultaneously, I was changing too. My hair grew back and, like the plant, I struggled to stay above the dirt.  When I moved to a new apartment, I repotted the plant thinking it needed more room for the roots.  It stayed alive but still did not flower and did not sustain much growth.

Four years after receiving the plant, I moved to a house and put it in the front window.  It had finally found its happy place.  Today, six years after receiving the plant, it sits in a 12-inch pot, still in the front window.  It is 24 inches tall and extends out into a 55-inch circle. The plant flowers at least once a month. The man who sent it to me lost his wife and about a year ago, I lost him. The last time I saw him, I shared the story of the five-year-old plant, but I think he barely remembered he had sent it.   The plant that had served as my constant reminder that change is right in front of us, always. The plant did well, then struggled, then did okay, then struggled and now, is flourishing. The plant had served as my constant reminder that change is right in front of us, always, and that as humans, some days (weeks, months, and even years) we may flourish, and others we may struggle. Sometimes I just stand by the plant and look out the window.  As it stands tall, I stand tall.  I am amazed by its beauty and its persistence despite the odds against it.  This fall, I looked out the window and saw a tree in the front yard covered in the most spectacular orange leaves I had ever seen and I almost cried. It was right out of a Vermont postcard and I live in North Carolina.  Now it is February and there are no leaves, just empty branches.  Like the plant, the tree changes too.  I remind myself that it will soon have new leaves. The tree, like my plant, is yet another illustration of how change is right in front of us, if we only take the time to notice it.

The plant has become my metaphor for change.  What will your metaphor be?  What around you can inspire you to make, cope with, accept and embrace change?

Cece Abby Krelitz is a Certified Hospitality Educator with the American Hotel & Lodging Educational Institute.  She is currently employed as a chef instructor, at Johnson & Wales University, in the Baking and Pastry Department. Cece is a graduate of the University of Nevada, Las Vegas, with a degree in Hotel Administration. She also is a graduate of the New England Culinary Institute, with a degree in Occupational Studies in Culinary Arts. Cece is currently enrolled in the Masters of Entrepreneurship Degree Program at Western Carolina University. Webmasters and other article publishers are hereby granted article reproduction permission if this article is used in its entirety, attribution is given and the author’s information and any links remain intact. Copyright 2017 by Cece Abby Krelitz.  https://ckbakesblog.com

I just prefer to do work that enhances my ability to be a better entrepreneur.  My interest in a graduate program hinged on the fact that I wanted practical learning to be a big part of the program.  So “doing things” was much more important to me than simply getting another degree.

Our hearts and souls go into this and it’s more than just a job to us; it’s a personal investment of our lives!

In this program it seems that striving for grades is secondary to cultivating dreams and learning things that we can actually apply to our future endeavors. Who would have thought that education could be so practical and equally powerful?

The opportunity to learn skills from real entrepreneurs is what drew me to the ME program – the emphasis on experience and doing rather than simply attending and turning in work.

It has been a dream of mine for several years to complete this program. Everything about it intrigues me. I believe that the program will help me to grow into a more complete entrepreneur. I would like to expand my knowledge base so I can learn to be a more efficient and robust businessman.

Entrepreneurship to me is an exciting field!  It allows the individual to express themselves through their career choices.  We aren’t restricted by the guidelines or rules of others.  We want to be our own boss and it’s our job to make sure that our personal best is increasing as each day goes by.

The ME Program at Western Carolina University is exactly what I have been waiting for!  My entire education career has been based on lectures, exams and trying to excel at a standardized level; to which I am assuming that most of you have experienced the same.  I have always been the type of person who learns more with a hands-on approach.  It seems so much more enticing and it actually allows us to engage ourselves on a deeper level, rather than just trying to memorize information that is being jammed into our brains.

I am excited for my first semester as a graduate student taking hands-on online courses.

Learning is all about connections – connections with students, professors, materials, subjects, life, etc.  As an adult, I’m not so interested in memorizing tables of data; I want to engage in experiential learning with a cohort of like-minded people.

This is the first time in my life of education that I feel “giddy” inside about taking an online course. The thing is, I so desperately want to LEARN, grow and achieve. The [Western Carolina University ME System] has offered this opportunity for me. I am excited about what is to come in the future.